A Matter of Discipline – Part 2

In my last post, I covered the form of forward-seat riding known as Hunt Seat – which has evolved into a style extremely popular in the show ring. Today, I’ll give you a brief overview of two other types of forward seat riding – Show Jumping (also known as Stadium Jumping) and Eventing.

While neither Show Jumping nor Eventing are an actual “seat” – they are both Olympic Sports, and the riding styles utilized vary somewhat from Hunt Seat. You’ll often hear the term “hunter/jumper” used to define a kind of hybrid interest, but there are some definite differences between the two.

The sport of Show Jumping is pretty much what the name implies – jumping at a show. Despite the amazing feats of Regina Mayer and her cow Luna, you will mainly see horses and ponies in the jumping arena. In jumpers, unlike Hunters – the scoring is completely subjective – points are subtracted for each fault a horse and rider incur while on course.

Faults are given for a jump being knocked down, the horse refusing a jump, going off course and general disobedience which affect the forward motion of the horse.

Typically, riders in the Jumper arena will have their stirrups shorter than when riding hunters. Again – form is following function; fences in the jumper ring in international competitions can be over 5′ in height and in many cases, the round is being timed. 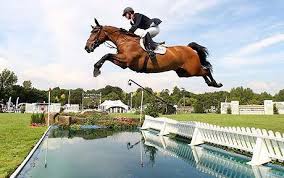 At the larger shows, the courses could pass for a final exam in a landscape design class – abundant use of potted trees and flowers is common, and many big name sponsors have their logos worked into the design of the jumps.

Sponsors are important to the sport

Corporate sponsorship is very important to equestrian sports, and the prize money offered can run into the hundreds of thousands of dollars for a premier event. According to The Equestrian Channel, 5 million people watched the Rolex Kentucky Three Day Event on NBC in 2004 – which is a great bit of info to use to segue into the topic of eventing.

Eventing (also called 3 Day Eventing and Combined Training) was originally developed as a test of cavalry horses. It’s composed of three phases: dressage, cross-country and stadium jumping. The dressage phase was used to gauge the horse’s obedience and maneuverability (more about Dressage in an upcoming post). The second phase, cross country, is held over the countryside with “natural” obstacles composed of trees, banks, ditches and various types of water obstacles. This phase tests the horse’s fitness, bravery and stamina.

Levels at nationally recognized events (governing bodies are United States Equestrian Federation and United States Eventing Association) run from Beginner Novice (with a maximum height for fixed fences at 2’7″) to Advanced, where the heights of obstacles can be up to 4’1″ for stadium fences and 3’11” for fixed cross country fences. The cross country portion of upper-level competitions will consist of four sections. Section A is Roads and Tracks – which is all on the flat and can be considered a warm up section. Section B is Steeplechase – held over brush steeplechase fences at a faster speed than Section A. Section C is more Roads and Tracks and Section D is the Cross Country Jumping course.

The third phase of a Three Day Event is Stadium Jumping. This is held over painted fences similar to a regular show jumping class. This final day of competition takes a measure of the horse’s true fitness level and asks technical questions of both horse and rider relating to lines and distances.

Outside of the Olympics, two of the most famous three day events in the world are the Rolex Kentucky Three Day Event held at the Kentucky Horse Park each Spring; the Badminton Horse Trials held at Badminton House in the UK in April of each year. Both are very well attended by the horse loving public – and at Badminton, that often includes members of the Royal Family. Princess Anne, her former husband Captain Mark Phillips and their daughter Zara have all competed at Badminton, and many other Royals have attended as spectators.

Even if your horsey life doesn’t lead you to rubbing shoulders with Royalty while walking the cross country course at Badminton – I hope you enjoy the journey.

Next up – a little about the sport and art of Dressage. Travel well, my friend.