A trot down memory lane 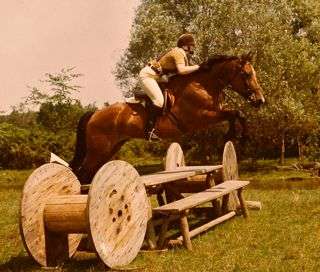 They say that those who don’t learn from the past are doomed to repeat it. As midlife riders who have been out of the saddle for a while, we’re more likely to wish we could repeat it! How is it that the carefree (and pain-free) days of riding as a teen have morphed into days filled with fatigue, fear, and frustration?

We remember (or hear) stories about kids who jumped their ponies through rings of fire or over piles of their friends stacked up to create a good-sized jump. Galloping across fields with nothing more than a halter and lead rope on our horses… what were we thinking?

My main riding discipline eventually became dressage for many reasons, one of which is that I’ve always been kind of a chicken rider.

My not-terribly-brave youth didn’t involve jumping horses through rings of fire, or over piles of my friends and acquaintances. It didn’t involve a lot of (intentional) galloping across open fields. It did; however, involve trail riding (usually by myself) up the mountain near our house. I’d either ride up the slopes of the ski area (only in the off-season), or the section of the Appalachian Trail located a half-mile or so further down the road (both of which were completely against the rules of the ski area operator and whichever governing body makes up the rules for the Appalachian Trail.) What was I thinking??

My little Quarter Horse/Arab cross mare, O’Malley, was a former cow horse, so she was fine with going up mountains, climbing over fallen stone walls and jumping fallen trees, but when I think now about going out for hours on my own up a mountain on a horse at the age of 13, it seems like it was a level slightly above chicken.

I remember the lessons when my riding instructor had me jump the little brook at the ski area. It was a nice natural obstacle, and, it was fun, although a bit scary. Going back to the ski area years later and looking at that “little” brook, I felt incredibly fortunate that my little 14.2 hand cow horse was an honest horse with tremendous heart. The brook ran about 8’ below the top of the banks, and where we jumped it, probably around 10 – 12 feet wide. What were we thinking???

I remember riding my mare to our regional high school for VoAg open house day when I was a freshman. I can’t remember exactly why I rode her the 12 or so miles on that chilly morning. We didn’t own a trailer, so perhaps I couldn’t get a ride, perhaps it was just a nice way to be allowed to get to school late (and earn props for having ridden a horse to school). The trip covered several miles of dirt road, but also several miles of windy two-lane roads with no shoulders. At any moment, a truck could have come along and plowed into us, ending the whole trip right there and then. What was I thinking??

The trek to school that day was followed a year or so later with joining the local Pony Club. Neither O’Malley nor I were big fans of stadium jumping, although we both loved cross country. (That’s O’Malley and me in the cover photo). I rode to one of the Pony Club lessons (which was only about 5 miles from home) for a showjumping lesson one day. The plan was I’d ride back home at the end of the lesson, but the unplanned flight headfirst into a jump pole and consequent concussion changed the plans and I didn’t get to ride her home till 2 days later. I was grateful that my naturally chicken-shitted nature meant I always wore a helmet, but I had lots of friends who only wore them in the show ring. What were they thinking???

And just like that, we’re suddenly in our 40s (or 60s). How did this happen? One day we’re jumping over possibly less than suitable obstacles and the next we’re hauling our kids to riding lessons or watching them graduate from college.

It occurs to you that if you’re planning on riding again, you’d better get on with it. You figure out a way to make it work around your already stretched schedule (and budget), and you’re so excited to be getting back to riding. You were like a fish in water on horseback. All of that freedom and those lazy afternoons riding up and down the sides of mountains or jumping over stacks of friends. It’s going to be so wonderful to feel that again.

And then… it’s not. Not wonderful at all. Doubts, self-flagellation, frustration – all vying for the top spot in your beaten-up psyche.

We wonder how the heck we could hesitate about riding again. We wonder what our out of shape bodies will look like in riding clothes or sitting on a saddle. We see the other midlife women who look like they have ridden at least an hour every single day of their lives, and the gap in our riding seems more like the Grand Canyon than the brook at my local ski area. Could we be feeling… fear?

The more difficult fears are those which slip in under the radar. They’re not directly tied to something that has the possibility to cause imminent bodily harm. These are often social fears. I-don’t-want-to-look -like-a- idiot fears. And these are the ones most likely to cause self-flagellation.

When a task that was easy when we were 13 is now is difficult, our first thought is often something along the lines of, “What the hell is wrong with me?’” (At least that’s one of my first thoughts). But we’re judging our 40- or 60- or 80-year-old selves by 13-year-old self standards. Ladies, we need to stop doing this. Seriously, just stop!

Easier said than done, right? Heck, we have decades of self-flagellation under our belts. We’ve elevated it to an art form. But although we have no problem slinging insults at the person in the mirror, we would be horrified to even think of speaking like that to a friend, an acquaintance, or even somebody we don’t actually like.

We’re great at making allowances for other folks. We see another midlife woman riding and we think, “Well, I think it’s wonderful that she’s taken up riding again. She amazes me – she hasn’t ridden in 35 years!”

Here’s a little tip ladies, she probably used to talk to herself the same way you talk to yourself. Hell, she probably still does. But the important thing is that she’s gone one step beyond the self-directed trash talking. She’s gone toe to toe with that voice in her head telling her she must be an idiot to even think about riding again. She sees the extra 20 pounds she’s carrying, she feels the fact that a half-hour lesson wears her out, but she has made the conscious choice to extend herself some grace.

According to the good folks at Merriam-Webster,  grace can be defined as: “disposition to or an act or instance of kindness, courtesy, or clemency”  An instance of kindness. That’s all it took for that woman to move past her weight and questionable level of fitness. She. Made. A. Choice.

To (poorly) paraphrase Hamlet, why does it seem nobler in the mind to suffer the slings and arrows of outrageously poor opinions of ourselves? We need to catch ourselves when those hateful words are drumbeats in our minds. We need to take a deep breath and say, “Enough. I’ve had it with the negative opinion I have of myself. I’m not the first woman to come back to riding after a break, and I won’t be the last.”  You need to notice the inner hater and shut her down.

Until you reach your judgment-free (or at least judgment-reduced) place, please, do me a favor. Every time you ride, imagine my voice saying, “Well, I think it’s amazing that you’ve taken up riding again. You amaze me,  no matter how long it’s been since you’ve ridden.” Each time you go to the barn, keep imagining that my voice is cheering you on until one day, your own voice will be ready to be heard.

It’s not going to happen overnight. That bitch has been running your brain for the last however many years, so this is going to take some consistent, concerted effort. You’re going to wonder if you’ll ever stop being mean to yourself. If you’ll ever just enjoy riding without all the judgment. Take heart, you will. We will. Hour by hour, day by day, week by week, we’ll start scraping away the crust of self-hatred and find that there’s actually a pretty wonderful woman underneath it all. It takes 9 months to grow a new human, so maybe we should consider this a 9-month plan. We’re not growing a new human, we’re uncovering the one who’s been there all along.