The Best First Horse Ever 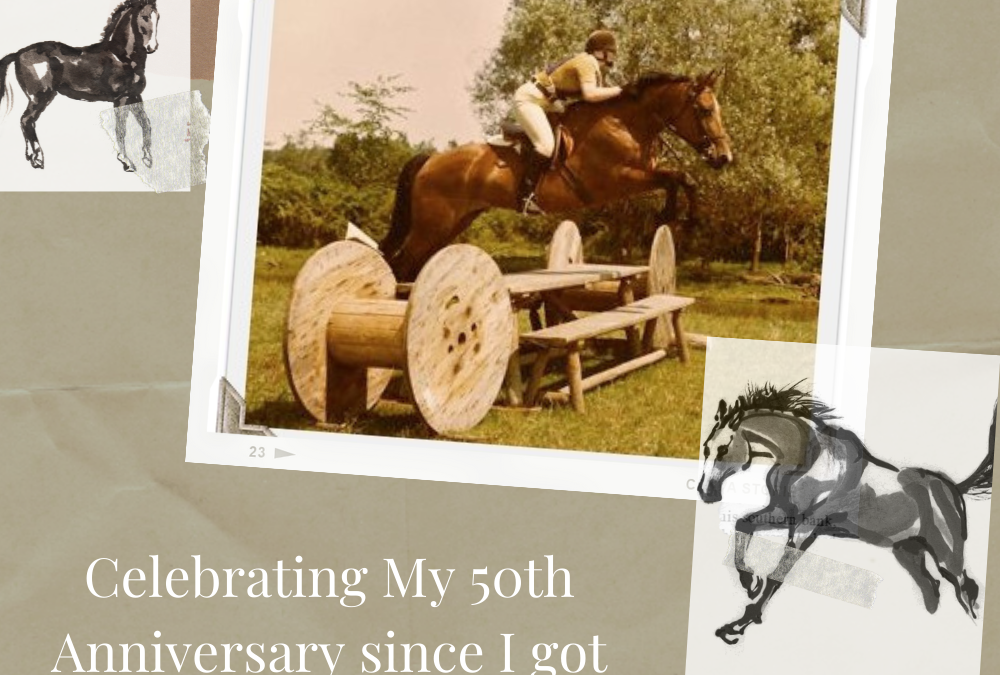 I celebrated a monumental occasion yesterday.  50 years ago, July 10, 1971, I got my first horse. I was 12, and a total horse addict. All of my Scholastic Books orders contained horse books. I had read every horse book in both the school and town library by the time I was in 5th or 6th grade. It was clear to my parents that this was not something I was going to outgrow.

Unbeknownst to me, my Dad had been driving around rural northwest Connecticut on his lunch breaks looking for a horse for me. One day in July, 1971, he stopped by a dealer’s farm and happened to notice a bay mare (although he wouldn’t have been able to name the color or the gender at that time).  He spoke with the dealer and made arrangements for us to go try out the horse that Saturday. I was over the moon excited!

When we got to the yard, the dealer asked me a few questions:

Dealer: Do you ride English or Western? (Read – let me start working on my sales spiel)

Dealer: Have you ridden much? (Are you likely to get killed by the horse if I let you ride her?)

Me: I can walk and trot and I’m in 4-H and want to ride in horse shows.

Dealer:  This horse is going to be perfect for you!! She was owned by a girl who showed her in 4-H shows until she went off to college and had to find a new home for her.

The truth, we discovered much later, was that this horse arrived on a box car from Montana just a week or so before I went to try her.

The $400 was paid, and my horse was to come home in just a few days once we had everything ready for her. Like fencing. And shelter…

Neighbors of ours whose horse I had been riding, had an extra stall, and that’s where she spent her first few nights as my horse. My Dad, being of Irish decent and Scottish birth, suggested her name should be O’Malley, due to the OM brand on her left flank.

My Dad and I spent the next couple of days mowing the field, and putting up 1 strand of electric fence to surround it. Dad had already begun construction of a small barn to store his outdoor tools, and half of the 10’ x 20’ structure became O’Malley’s stall.

O’Malley was a wonderful first horse. She loved life in general.

The list of her positive traits was long, but there were a few she had that drove me nuts.

As I mentioned earlier, O’Malley had an OM brand on her flank. It just so happened that a person who worked with my Mom (the wife of the man with the pick up with the rack), had an old brand book. Just on a whim, she looked up O’Malley’s brand – and it was listed!! I was so excited!

I wrote down the address (on the Montana/North Dakota border) and went home  wrote a letter (it was 1976 at that point). I could not believe it when I received a reply a week or so later. They had bred O’Malley, and still had her Quarter Horse dam Lady, although her Arabian sire had been killed by lightning a few years before. They sent pictures and we began communicating. The summer between my junior and senior years in High School, my parents and I travelled in their motor home out to visit the Moe’s and see where O’Malley had started her life.

We were welcomed into the family, and I got to ride Lady on a roundup 2 days after we arrived. Fortunately, I had been getting O’Malley and myself fit for a Pony Club rally, so I’d been spending quite a bit of time riding. But not in a Western saddle… Let’s just say it was a long (and amazing) day. Lady decided to go after a stray cow at one point. I figured she probably knew what she was doing better than I was! Once Lady was satisfied with getting the cow going in the right direction, I looked around and couldn’t see anyone. Which is kind of scary when you’re riding a horse in an area called the Badlands. But I figured O’Malley had to get her horse sense from someone, so I let Lady choose the way and we were back together with the main group wishing about 5 minutes. (5 looong minutes!) .

I should probably close now. I could keep telling stories about O’Mally for hours. It’s hard to believe that that horse that “a college girl rode English in horse shows” turned out t be a much better horse than that dealer could even imagine.