Frustrated Because You’re Not Reaching Your Horsey Life Goals? Help is at Hand! 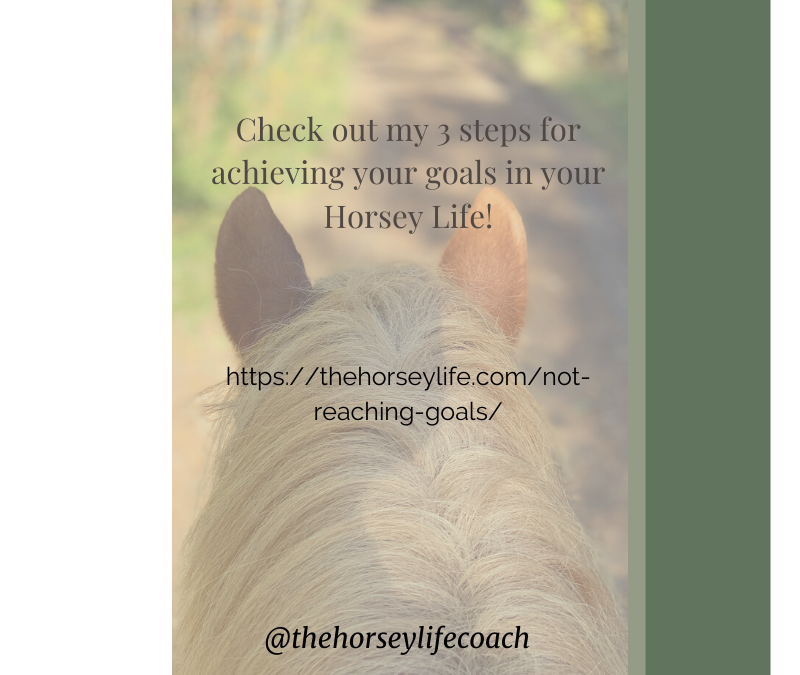 Have you ever realized that “goal” is a four-letter word? The irony and appropriateness of that amuse me (but my amusement threshold is incredibly low after a year of pandemic life).

According to Wikipedia, a goal is “an idea of the future or desired result that a person or a group of people envision, plan and commit to achieve.” When I was running my training barn, I created goals tailored to each horse. One stallion that came to me for training clearly needed to relax his topline use his back more freely. He had been started by a rider who tried to control him by taking a death grip on the reins. By the time the poor horse came to me, his defense mechanism was to just tuck his chin against his chest, totally dropping behind the contact, and then just tank off. He clearly needed to be ridden sympathetically, and learn to seek the connection rather than fearing it.

My solution for him was to take him out trail riding. He’d never been out on trails, so it would be an experience he wouldn’t associate with having his head cranked in, and he was fascinated by all the smells. He walked along like a bloodhound, nose to the ground, and stretching over his topline nicely. As the days went by, I gradually asked him to walk on very light contact, then a bit more contact, and he was perfectly happy to comply. After about 3 weeks of solely being hacked out, I took him back in the ring and he happily stretched over his topline and reached for the connection with the bit. How did I achieve my goal? I used 3 steps that can be applied to any goal – horse-related or not.

If you’re having any training issues with your horse, take a step back and decide what your end goal is.  The steps required to help a horse relax his topline may be quite different than if you’re wanting your horse to be more responsive to leg aids. I always ask students if they want to ride in the Olympics, or would they be happy taking relaxing trail rides or entering some local shows. Be crystal clear about your goal will help you attain it that much more quickly and easily.

In the words of the inimitable Yogi Berra, “If you don’t know where you are going, you‘ll end up someplace else”, so make sure you know where you’re going!